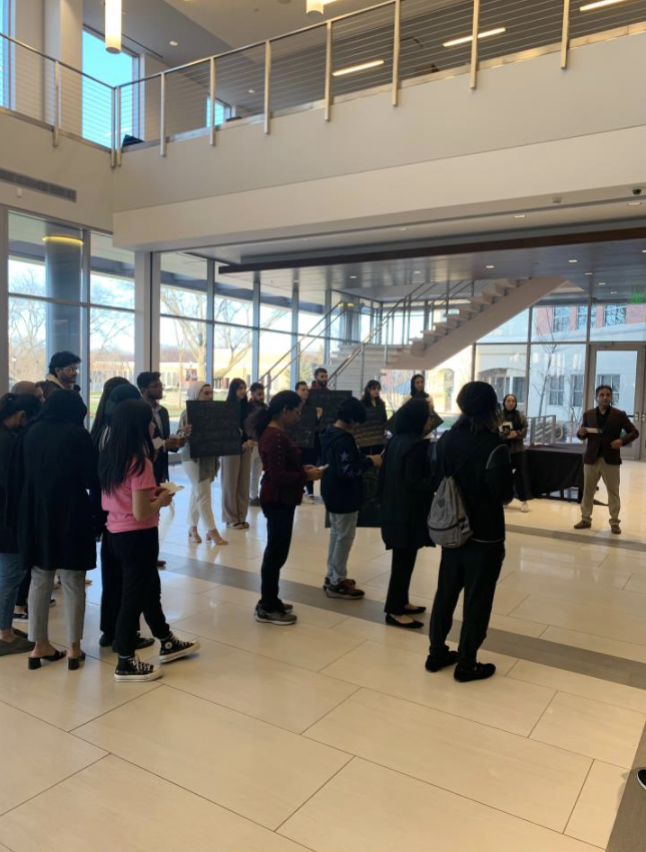 “We are sitting in this room having equal rights and this is thanks to the 100s of years of fighting made by the Asian Americans and African Americans who made so much sacrifice,” said Junaid Ahmed. “Sometimes, we don’t pay attention to what we have.”

Ahmed continued to speak on the issues that Asian Americans face in the country.

“You have to look back at the recent history, you don’t see what Asian Americans went through,” said Ahmed “Fast forward now, we still don’t hear much.”

After the keynote session, the event led to the first floor of Goodwin Hall for the Unity Walk. The walk took place inside due to the weather and there was a chant against racism and injustice.

“One, two, we stand against injustice everywhere,” said Samiha Syed, the organizer of the event. “Three, four, we pledge to advocate for positive change.”

The event concluded with some Benedictine clubs presenting an Asian American leader from their respective group. Doctors Without Borders, The Muslim Student Association, Student Senate, Pre-Pharmacy Club, and UNICEF all presented.

“It was a very empowering experience to see a vision I had become a tangible reality and to see so many people participate,” said Samiha. “I learned a lot and I feel it is truly an honor to be an Interfaith America Fellow.”

The event ran under three hours and offered a dinner from CHI TEA.

“I think the event was very successful and I think the program was very meaningful to those who attended.”