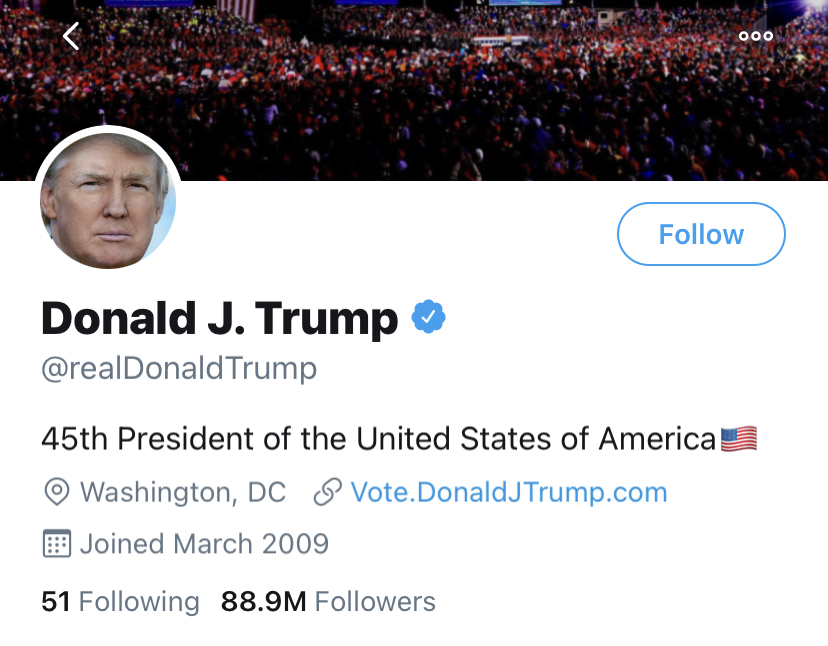 President Trump has always utilized Twitter to express his thoughts. Regardless of how you feel about him, his tweets are highly controversial and are constantly fact-checked because they are false or often misleading. Here is a list of tweets that took place after the election.

On November 5, President Trump tweeted out stating “STOP THE COUNTS!” This was while the ballots were still getting counted in multiple states. He also tweeted this out after he claimed in his speech on Election Day, that he had already won.  He also claimed counting ballots after Election Day is considered “a fraud on the American people.” 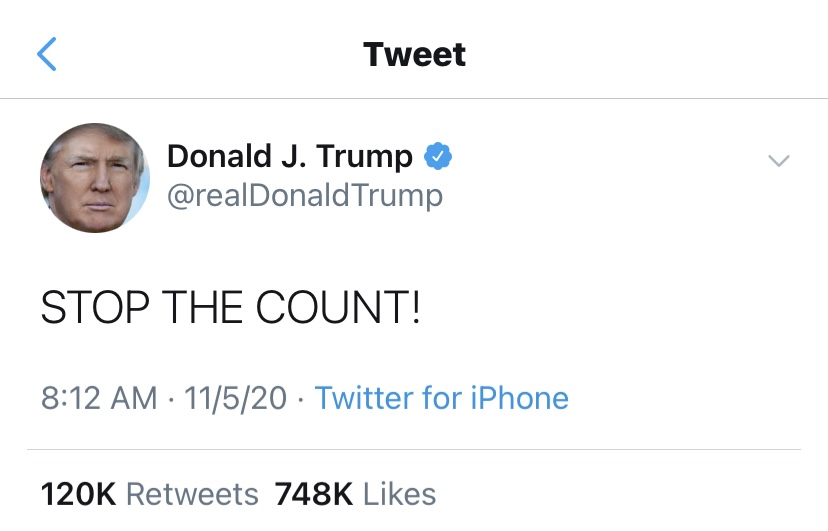 He tweeted this the following day claiming again that the ballots that were being counted after Election Day are illegal. This was of course proven to be false, given that mail-in ballots were still being counted in multiple states, the American people were not going to know who the president was until days after election day. 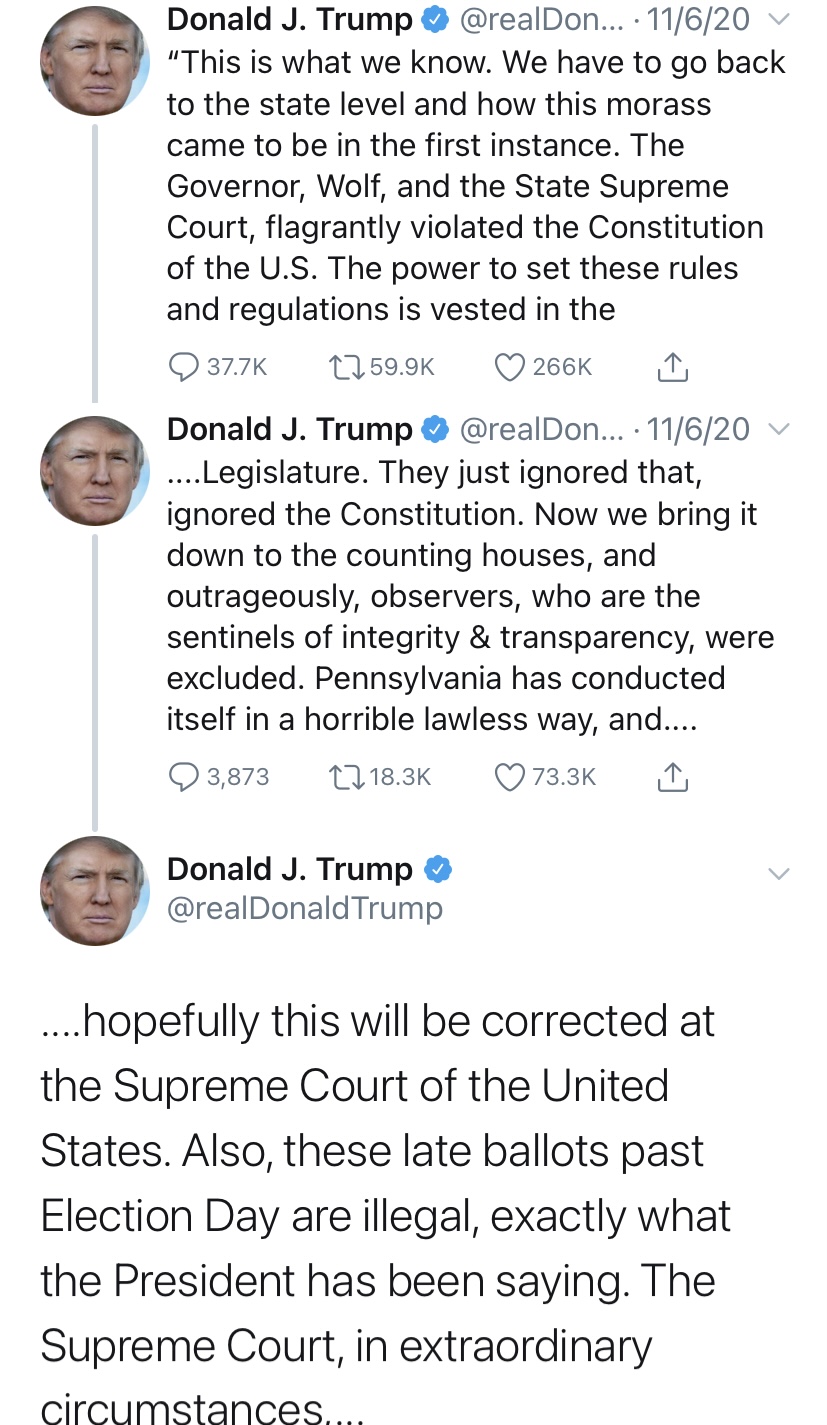 He later took to Twitter to ask where the ballots from the military went in Georgia. 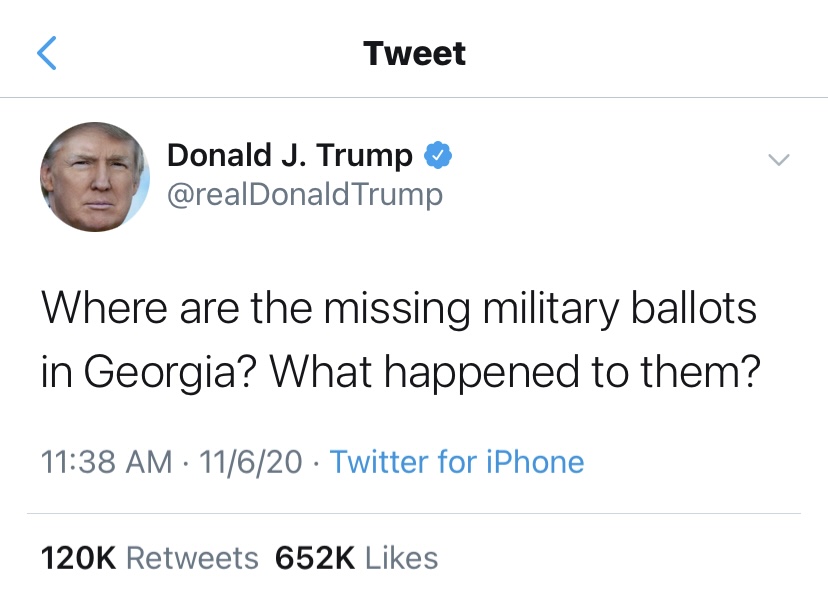 He also claimed on Twitter the same day that Joe Biden should not wrongfully claim that he won the presidency, even though on election day, he claimed victory prematurely on numbers that weren’t done being counted. 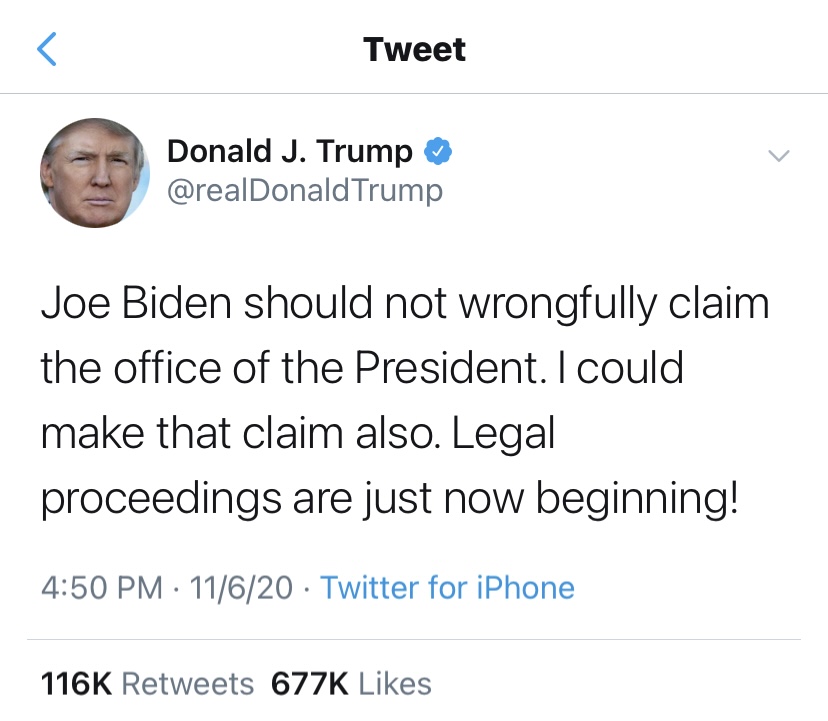 The next day President Trump tweeted out claiming he had already won the elections by a lot, which absolutely no evidence to back this statement up. Twitter has been marking a vast majority of his tweets due to the fact that they are either false or misleading. 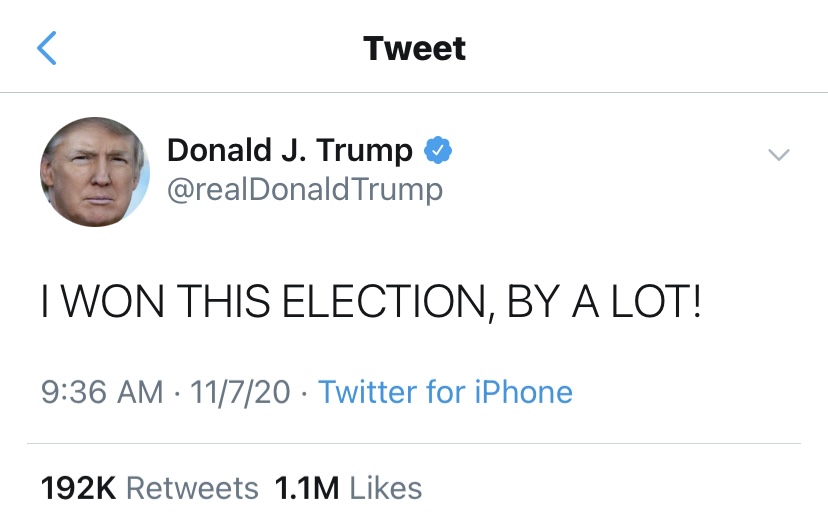 He tweeted out the next few days about the voter fraud that occurred in multiple states, again with little to no proof of anything actually happening. 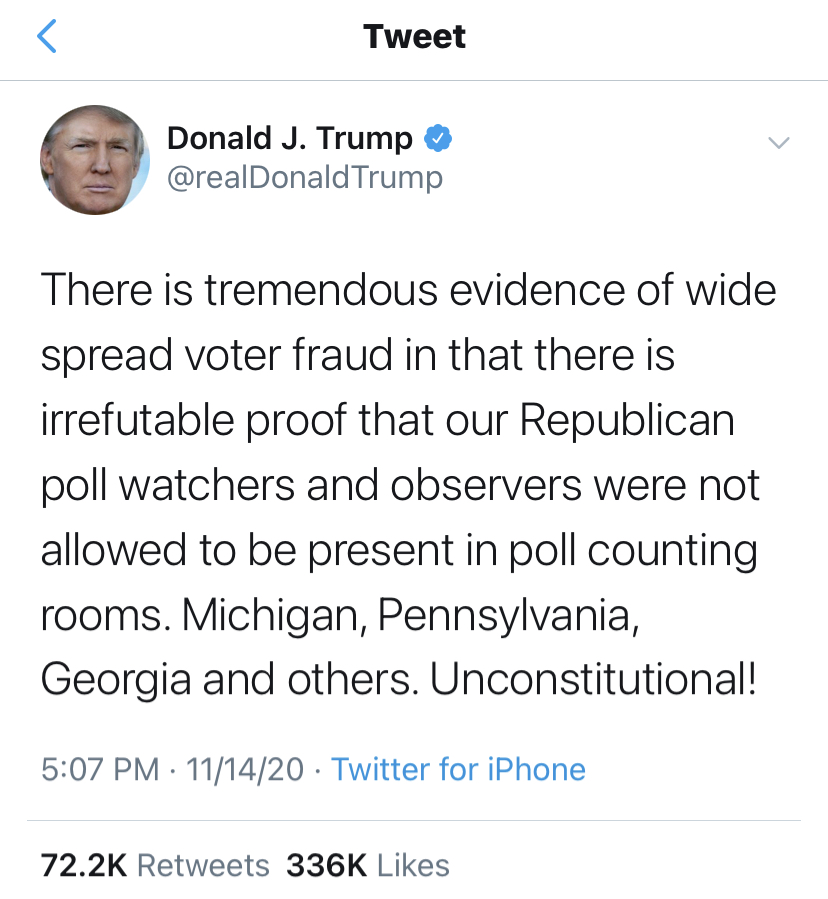 Three days ago on November 15, President Trump claimed the election to be rigged multiple times. 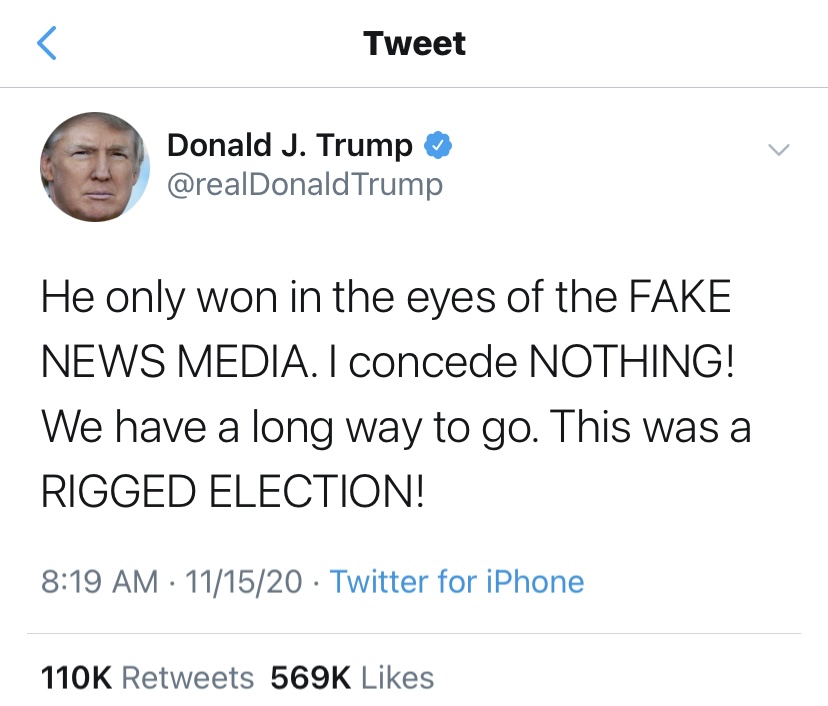 Again on November 15, he claimed again on Twitter saying he won the election, in his famous all caps style. 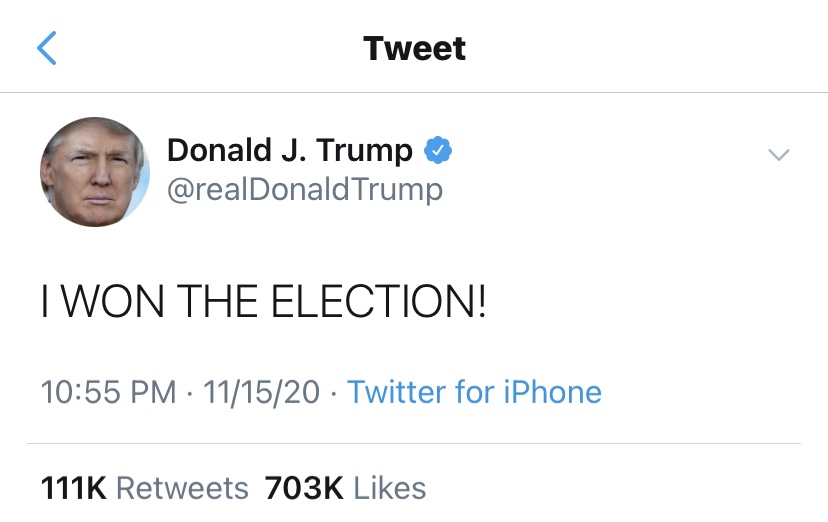 Two days ago on November 16, he asked historians to remember the vaccines that were announced to be highly effective, took place on his watch. 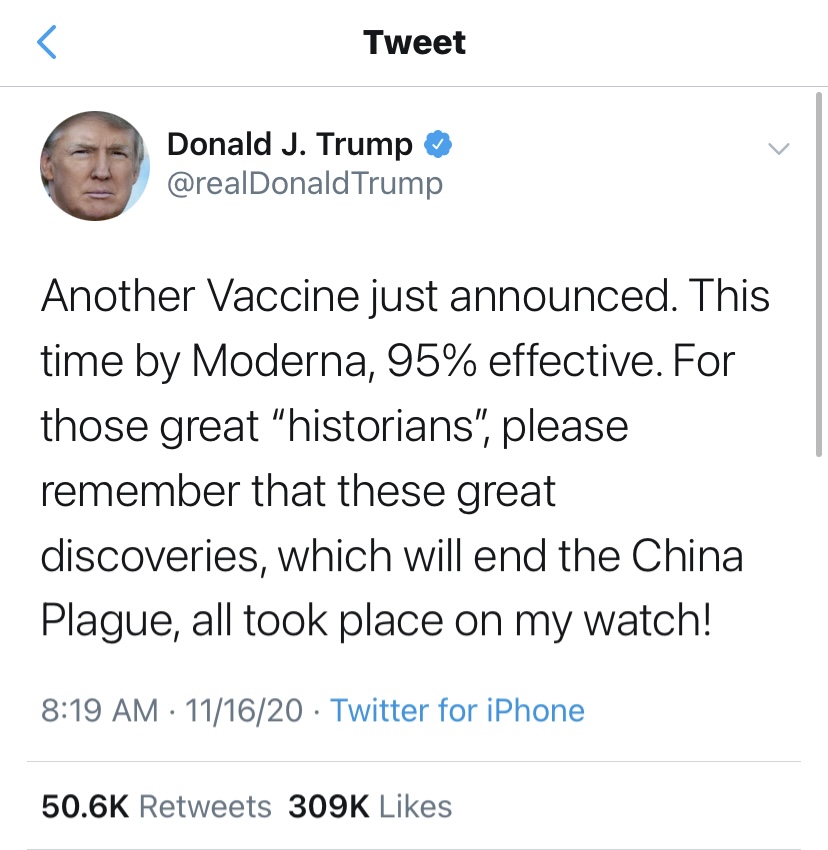 President Trump is still continuing to tweet out misleading information and has shown refusal of giving up the White House when his time comes to leave. According to NBC News, “his administration is beginning to press forward to cement new regulations and other policy changes before President-elect Joe Biden’s inauguration – rules that will be challenging to undo once they are finalized.”

Published by The Candor

Student media at Benedictine University. View all posts by The Candor

Welcome to The Candor

The Candor is the award-winning student news publication of Benedictine University in Lisle, IL. Since its creation in 1982, The Candor has continued to grow each year to serve the needs of the Benedictine community. The Candor is a member of the Illinois Collegiate Press Association.

All decisions/content on The Candor's website are the sole responsibility of the student editors and do not necessarily reflect those of Benedictine University.

Email us with questions or story ideas: thecandor@yahoo.com